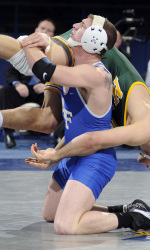 I had been a 4-year starter on the wrestling team and I never had a concussion before. At the second tournament of my senior year in the first minute of my first match of the day I got a chin to the back of the head. I continued wrestling the match and lost and after I began to have a headache. Thinking I would be a sissy if I blamed a concussion for the loss I kept it to myself and wrestled three more times that day and felt nauseous sporadically. I was then diagnosed with a concussion. This didn’t really phase me because it was a long season and the people who I had seen with concussions were back in a week. Every time I tried to get cleared I kept experienced blurred vision and tracking problems. Eventually, three months went by of disappointment every week that I could not wrestle again. I had pretty much given up hope.

Then one week after once again getting denied to be able to workout let alone wrestle the doctor sent me to the optometrist. I met Dr. Watt and he immediately suggested vision training. Within a week and a half of doing this vision training, I had gained control of my eyes again. I could now shake my head and not have everything turn to a blur. With only a month left in the season, I hopped right back into wrestling. I got back in shape reluctantly because my body had been dormant for months. I eventually earned backed my starting spot and was able to finish my senior season by competing in the Mountain West Conference Tournament. Unfortunately, I found out about vision training a little too late and was not able to be as prepared as I should have been. Had I done this training from the beginning I may have been able to accomplish my dream of going to nationals. I am still incredibly grateful I started it at all because it did salvage my last chance to wrestle ever.